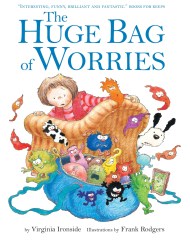 The Huge Bag of Worries

A reassuring picture book encouraging children to open up about their fears and anxieties to help manage their feelings. The perfect book to soothe worries…