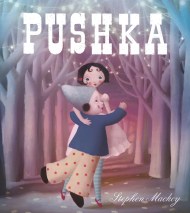 From the creator of Miki, comes a brand new and captivating character - Pushka, a little clown. Pushka is fast asleep in his bed on…