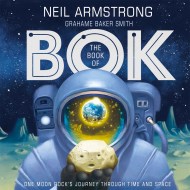 The Book of Bok

First man on the Moon Neil Armstrong reveals the adventure of the first Moon landing, and how the Earth and the Moon came to be,…