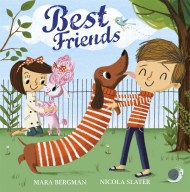 Dexter, Daisy and Lily are up to their usual doggy tricks causing mayhem in the park, chased by their young owners. Three mischievous mutts and…