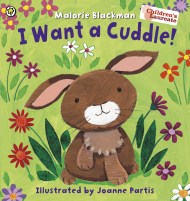 I Want A Cuddle!

An adorable story that feels like one big comforting hug, for difficult times when we can't see our loved ones for a nice warm cuddle.…