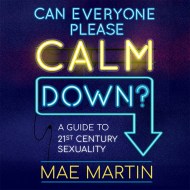 Can Everyone Please Calm Down?

Why do we find sexuality so, well ... scary? Comedian and co-creator of the hit show Feel Good, Mae Martin, investigates in this hilarious and…