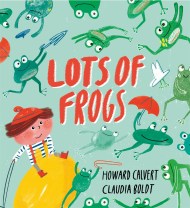 Tommy Fox has a box - a box full of frogs. And when they all jump out at school, that's when the fun begins! There…