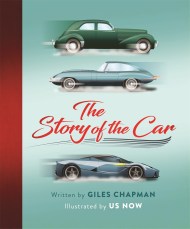 The Story of the Car

A beautifully illustrative history of the world's most iconic and popular cars of all time. Perfect for children and adult motoring fans alike! Cars do…