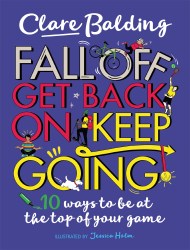 Fall Off, Get Back On, Keep Going

'Falling off' is all part of life. The trick is to know how to dust yourself off, get back on, learn from your mistakes -…