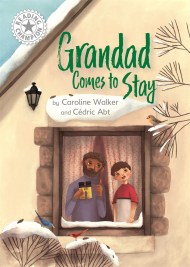 Oliver loves to RUN and he never sits still or moves slowly ... until an injury forces him to take it easy. Lucky for Oliver,…