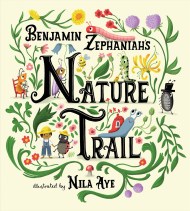 A joyful celebration of nature and the wonder of the world around us by legendary poet and performer Benjamin Zephaniah, one of The Times' top…